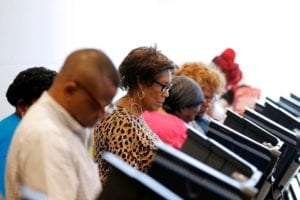 Georgia was headed to reach 2 million early voters as the early voting period neared an end. By Nov. 2, early voters had cast over 1.9 million ballots in the General Election set for Nov. 8, according to the Secretary of State’s Office.

“The numbers speak for themselves.  The early voting system is working and we look forward to a smooth General Election,” said Secretary of State Brian Kemp.

About half of the 50,003 registered voters in Rockdale County already had cast their vote during early voting. The early voting turnout in Rockdale as of Thursday, Nov. 3, 4:30 p.m., was 25,304. The number includes 23,577 in-person ballots and 1,727 mail ballots issued, elections officials