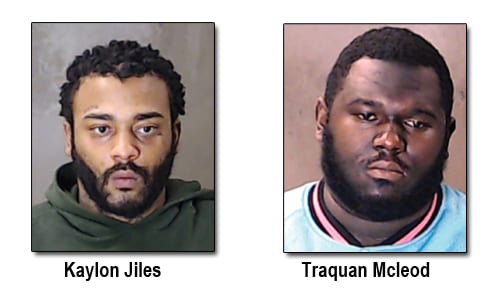 Kaylon Janard Jiles, 24, of Tucker and Traquan Alexander Mcleod, 22, of Decatur are in custody for the murder of Lawrenceville resident Eric Fisher, who was shot to death outside a Motel 6 in DeKalb County.

The shooting took place in November 2017 after Jiles and Fisher got into an argument, DeKalb Sheriff’s spokesperson Cynthia Williams said.  Fisher was shot multiple times. Jiles fled the scene in a black sedan, according to reports.

Four months later, Jiles  and Mcleod were arrested on Feb. 12 by the DeKalb Sheriff’s Fugitive Unit. Jiles, Mcleod and a third person were spotted at a Stone Mountain apartment complex at Juliette Road and East Ponce de Leon Ave. When they left the location, they were arrested during a traffic stop. Authorities found two stolen handguns in the vehicle, Williams said.

Investigators learned that Mcleod was wanted in a Decatur Sept. 13 armed robbery and aggravated battery case against Jonathan Mconico, an Atlanta resident.

The third person in the vehicle is being held by police pending further investigation, Williams said.