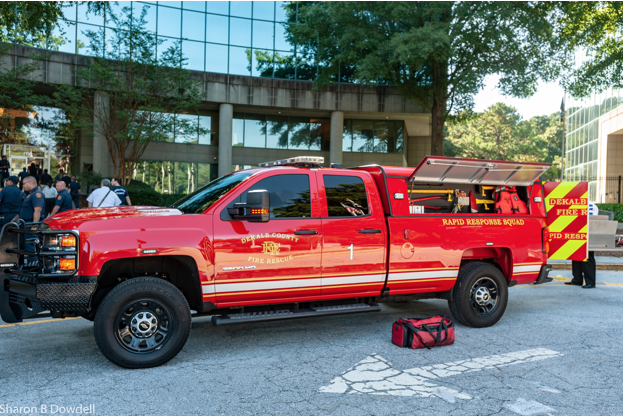 Nine additional rapid response vehicles will be deployed around the county by December 2019.

“DeKalb County is building a state-of-the-art emergency response and transport system,” said DeKalb County CEO Michael Thurmond. “These vehicles will be an essential component in responding to all non-fire emergency calls in a timely manner.”

The county operates an integrated service delivery system in which Fire Rescue units respond initially to most medical calls to begin care while the contracted transport unit is en route. All firefighters are certified emergency medical technicians, and many are certified paramedics. Officials say the highly-trained firefighters are able to provide the same level of care and have the same equipment and resources as an ambulance.

The rapid response vehicles are located at Fire Station 14, 7207 Covington Highway, Lithonia and Fire Station 24, 4154 Redan Road, Stone Mountain. Each unit is staffed by two DeKalb County firefighters who are certified emergency medical technicians trained to stabilize patients including treating conditions that require immediate life-saving actions such as major bleeding. DeKalb firefighters are the first to respond to a medical emergency until an ambulance arrives.

In 2017, the county developed a prototype of the rapid response vehicle to measure the impact the smaller unit would have on reducing response times and improving service levels. During the pilot program, the rapid response vehicle was effective and reduced the need to use the full-size fire apparatus by 14 percent. Additionally, average response time improved by 26 percent, the county said.

The county purchased 10 rapid response vehicles from funding generated from the Special Purpose Local Option Sales Tax (SPLOST) passed in 2017. A total of $2 million in SPLOST funding was allocated for the 10 response units. Each vehicle cost approximately $200,000, which includes the truck, upgrades and equipment.

previousRockdale: It’s time to get rid of your old electronics, paper piles