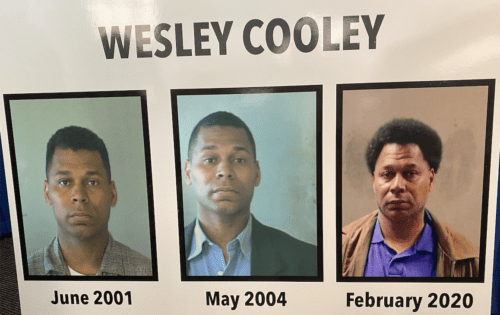 Further investigation revealed that the DNA evidence also links Cooley to seven other unsolved sexual assault cases, including four others in DeKalb, two in Atlanta, and one in Conyers. The crimes span a period of more than 20 years, dating back to 1999. The victims ranged in age from 15 to 38 at the time of the offenses. 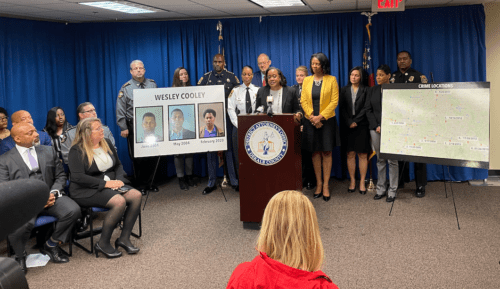 According to a warrant obtained by the DeKalb District Attorney’s Office, Cooley forced a woman to have sex with him after taking her to a vacant lot on Northlake Parkway in Tucker on April 25, 2017.  He was identified as a suspect following a positive DNA match in connection with the Tucker rape.

Cooley was charged with rape and taken to the DeKalb County Jail, where he was booked without bond. Additional charges are pending.

Further investigation revealed that the DNA evidence also links Cooley to seven other unsolved sexual assault cases throughout metro Atlanta, including four others in DeKalb, two in Atlanta, and one in Conyers. The crimes span a period of more than 20 years, dating back to 1999. The victims ranged in age from 15 to 38 at the time of the offenses.

“A dangerous predator whom we believe has been terrorizing women for at least two decades, is off the street,” said Boston. “This is a huge moment for the victims on whose behalf we advocate. We will continue to fight for them; to seek answers, and justice, no matter how long it takes.”

Cooley was identified through the investigative work of the Georgia Sexual Assault Kit Initiative (GASAKI) Task Force with assistance from the Conyers and DeKalb County Police Departments. GASAKI was established in 2018 in partnership with the Georgia Criminal Justice Coordinating Council (CJCC) as part of a multi-year, multi-million dollar federal grant under the National Sexual Assault Kit Initiative. The team consists of prosecutors, investigators, and victim advocates from the DeKalb County District Attorney’s Office, the Cobb County District Attorney’s Office, the Atlanta Police Department, the Prosecuting Attorneys Council (PAC), and CJCC (with resources from the Morgan County Sheriff’s Department and Live Safe) working collaboratively to solve cold case sexual assault crimes.

Additionally, the GASAKI Task Force relies on the ongoing work and commitment of the Georgia Bureau of Investigation Crime Lab to test backlogged sexual assault kits.

“Ultimately, the Task Force is proving what public good can be done by a victim-centered, multidisciplinary, and collaborative approach,” said Jay Neal, executive director, Criminal Justice Coordinating Council. “This is an important project and we are going to see it through—continuing to show survivors that Georgia stands with them.”

In addition to rape, Cooley also faces a separate charge of Criminal Attempt to Commit a Felony for an alleged attempted sexual attack of a female victim in Lithonia in October 2017.

Anyone who believes they may have been victimized by him is asked to call the Day League’s 24-hour crisis hotline at 404-377-1428. Counselors are on standby to assist and to forward information to law enforcement.