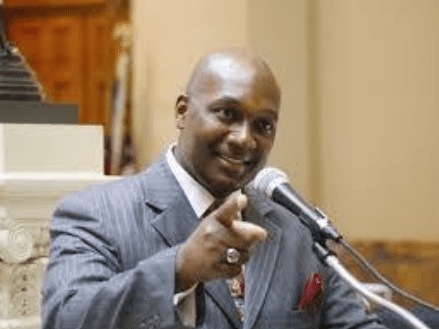 The employee, Ashlee Wright, filed the claim through her attorneys with the County and with the U.S. Equal Employment Opportunity Commission, alleging that during the course of her tenure in Adams’ office he made inappropriate comments verbally and via text messages.

Among Wright’s complaints are repeated requests to see photos of her in a bikini.

“This is not appropriate behavior for a supervisor, much less an elected leader and the bishop of a church,” said Wright’s attorney Robert James, who is representing her with his legal partner, Bruce Morriss. “Commissioner Adams created a hostile work environment for our client, making demands for ‘quid pro quo’ and ultimately causing her to fear for her job.”

Adams denies the allegations. He said Wright is a disgruntled employee who became angry after he fired her for poor job performance.

“She was supposed to set my calendar and ensure that I attended events and other commissioners attended events but I didn’t have any. The allegations she is making are false. I didn’t pursue this woman,” said Adams, who added that he is cooperating with the county’s legal department in its investigation of the matter. He said the investigation, which was launched in June, is expected to be completed by the end of this month.

Wright, who initially worked for former DeKalb County Commissioner Sharon Barnes-Sutton, was hired by Adams in December to be his executive assistant. Adams soon promoted her to District Director.

Adams’ inappropriate comments to Wright began soon after he took office, however, and Wright made attempts to address them directly while remaining professional.

Messages to Wright included expressions of “love” for her and attempts to have her reciprocate, frequent requests for a picture of her in a bikini bathing suit, and a request during an out-of-town conference to come to her room at 3:29 a.m.

The conduct continued in conversation as well, which Wright eventually began recording. In one such recorded comment Adams stated, “Ashlee had me covered … she know what her Big Daddy like.”

Wright feared she would lose her job when Adams wrote in a message to her, “it’s either ride or die or goodbye.”

She currently is on paid administrative leave and is seeking to be able to move forward in her career without having a negative mark on her employment record.