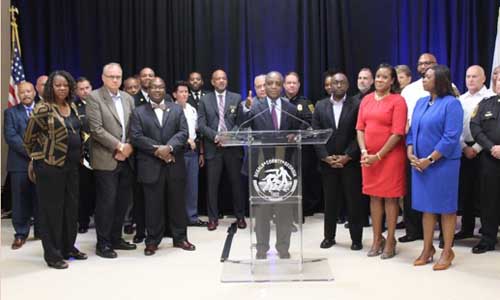 Today, DeKalb County CEO Michael Thurmond recommended to the county Board of Commissioners a four-percent public safety salary increase, effective the first pay period in November 2018. The total value of the proposed compensation increase is $7.1 million.

“DeKalb County is committed to ensuring that our community is safe,” said CEO Thurmond. “The county is taking a holistic approach to increase compensation for the men and women that play a critical role in protecting and serving DeKalb.”

The county’s significant investments in recruitment, retention and compensation have helped the county to overcome staffing challenges and relieve critical public safety shortages. The attrition rates in the police, fire rescue and E-911 departments have decreased. The E-911 department is fully staffed with 126 employees and staffing in police and fire rescue is the highest in several years.

The proposal is also part of a series of significant public safety investments since 2017, including technology upgrades to the E-911 software system, new vehicles for police and rapid response vehicles for fire.

The Board of Commissioners is scheduled to vote on the proposal at its Oct. 23 meeting.

Jury selection is underway in the murder trial against two alleged members of the Sex, Money, Murder gang and their reputed leader for a deadly home invasion in Stone Mountain that claimed the life of a baby.

The case is being tried by the Major Case Unit before DeKalb Superior Court Judge Gregory A. Adams.

nextPower restored to 97 percent of customers impacted by Hurricane Michael