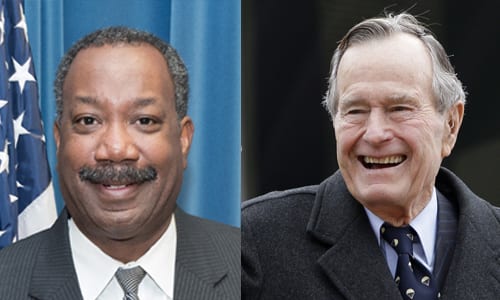 The passing of a President of the United States is a demarcation point in the life of this nation. This morning, I would like to mark the passage of President George H.W. Bush.

It was on his orders that I, along with thousands of other Americans, was deployed to the Middle East for Operation Desert Shield and Desert Storm. It was great when he came to the Kingdom of Saudi Arabia to visit the troops at Thanksgiving.

I will always remember when the ceasefire order came ending hostilities in that conflict. And I will simply say that I was very relieved not to make the trip to Baghdad. At that time I had seen all of Iraq that I wanted to see.

Many years later I published a book about that experience in my life. In the wake of that publication I received a personal note from President Bush thanking me for a copy and commending me for my service to this country. That note meant a great deal to me. A copy of it is on the home page of my book’s website.

As I entered my political campaign for the seat that I now hold certain people advised me that I needed to remove that letter. The rationale was that certainly my opponents would seize upon that, trying to use it against me in an attempt to turn into something that I am not. I said no to that advice.

True to form, my opponents did exactly what we thought they would try to do. Fortunately, the citizens of District 4 did not fall for that nonsense. People of good will can recognize that at some level partisan differences can be overcome.

Now, as we mark the passing of a man who dedicated his life to public service, I am even happier that I resisted the calls to remove his personal note to me from my website. It is something that I cherish.

May George H.W. Bush, the 41st President of the United States rest in peace.