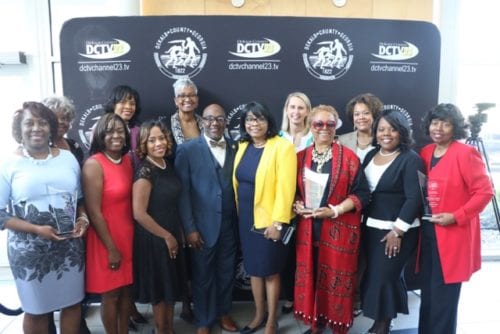 “It was such a great program. I am so humbled to be celebrated among women who have made such an impact on our community. I thank Commissioner Adams and all of those who worked so hard to make the event successful,” said On Common Ground News Editor Valerie J. Morgan, who was among the “Hidden Figures” honored.

Steen Miles, politician and journalist, also received a special tribute. She was honored with a page in the program as the” 2017 Hidden Figure Spotlight.” Miles, who is recovering from cancer, was unable to attend the luncheon.

“I believe Steen Miles is one of the original Hidden Figures. I wanted to make sure she was honored. It was really her idea to do something on this level,” said Angela Moore, who helped coordinate the program. “I mentioned it to Commissioner Adams and his wife and we just ran with it.”

Adams also honored his wife, Jacqueline, for her hard work, dedication and commitment.

Adams stated the Hidden Figures of DeKalb awards program was a chance to honor women who have aided in making DeKalb County successful and for the public to “meet women you don’t know who are behind the missions that you do.”

The movie is based on the non-fiction book by Margot Lee Shetterly about African American mathematicians who worked at the National Aeronautics and Space Administration (NAASA) during the Space Race.

Serenity Lemons, 14, and the Lou Walker Seniors Dancers performed during the program.

Here are the 2017 Hidden Figures of DeKalb: