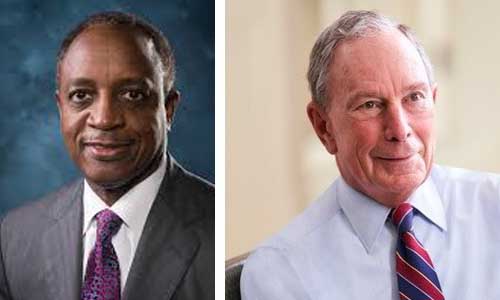 As DeKalb’s CEO, Thurmond oversees one of the most diverse counties in the Southeast.  Thurmond served as labor commissioner and was the first Black Georgian to win a statewide election in modern history, without first being appointed.

Thurmond will discuss Bloomberg’s record of achievement as the chief executive of New York City as one of several reasons for endorsing him. Thurmond cites Bloomberg’s three consecutive terms as mayor of the largest and most diverse city in America as proof that Bloomberg can rebuild the country at a time when it is more divided than ever, campaign officials stated in a news release.

Rawlings-Blake cites Bloomberg achievements as mayor of New York City, his no nonsense leadership style, and his ability to take on tough fights as her reasons for joining the campaign. She advises the campaign on policy development and strategy and helps promote Mike’s plan for Black America, which includes sweeping economic justice policies as outlined in the Greenwood Initiative aimed at closing the wealth gap, addressing systemic bias, and tripling the wealth of Black households, among other strategies to empower the Black community economically.