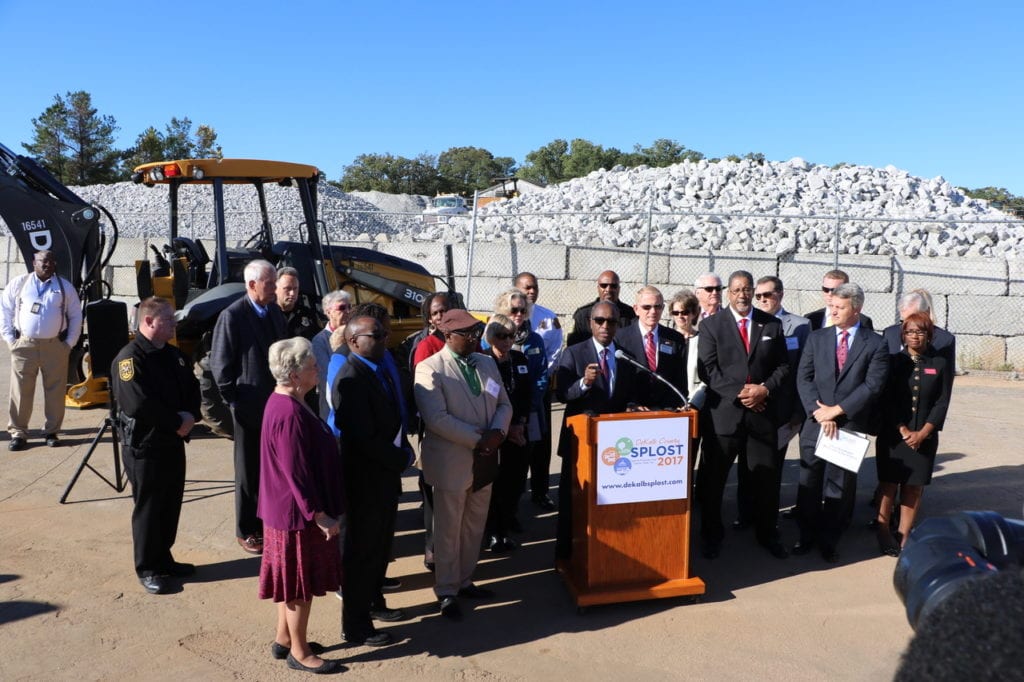 Flanked by mayors and leaders of the 12 cities within the county, DeKalb County CEO Michael Thurmond held a news conference on Oct. 18 to give an overview of projects that would be funded by the new 1 percent sales tax, if voters approve three referendums now at stake.

Passage of the Special Purpose Local Sales Tax would increase DeKalb’s sales tax rate to 8 percent and transform the county. Thurmond said the sales tax would pave the way for critical infrastructure improvements across the county including repairing roads, building a new fire station and adding 100 new police cars.

“Eighty-five percent of the money raised must be for roads, streets, bridges and public safety… It’s about improving the quality of life for all of our citizens in DeKalb,” Thurmond said.

Over the six-year term of the SPLOST, DeKalb County is expected to receive $388 million, with the 12 cities receiving a portion of $248.7 million based on their population. The cities will use their monies to fund their own infrastructure projects.

If the referendums are passed, the SPLOST will not apply to sales tax on groceries and prescriptions. Also, all homeowners would receive a reduction in their property taxes by the EHOST, Thurmond said. DeKalb County’s SPLOST is the only one in the state to exempt food and medicines, official said.

The ballot questions include:

For DeKalb County, the projects to be funded by SPLOST include:

For more information on the DeKalb County SPLOST, go to www.dekalbsplost.com.

For more information about the election, go to www.dekalbvotes.com.

Stonecrest SPLOST Yes, an advocacy group, is hosting a community breakfast to educate the public on Friday, Oct. 27, 8:30 to 10 a.m., at the Stoncrest City Hall (upstairs).

Each municipality in DeKalb County will receive a pro-rated share of SPLOST revenue based on its population as determined by the 2016 census estimates.

With Stonecrest being DeKalb’s largest with a population of 53,000, it is projected to receive approximately $47 million over the six-year period.

“With all of the amazing things to come for the city of Stonecrest, we need improvements to our roads, our own police department, improved recreational facilities and better access to transit.  SPLOST will get us on the path to address many of our needs to flourish as a new city,” said Chris Seabrook, a Stonecrest resident.