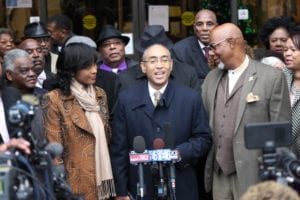 DeKalb County CEO Burrell Ellis returned to work on Dec. 14, welcomed by elected officials, constituents, friends and staff who gathered for a press conference that morning to hear from him firsthand.

“I’m savoring the moment, enjoying the day and can’t wait to be among the constituents,” said Ellis, who was accompanied by his wife, Philippa, outside the Manuel Maloof Auditorium in downtown Decatur. “We’re going to be sure the trains run on time, be prepared for any emergency and ensure a smooth transition.”

Ellis, who was suspended in 2013 after being indicted on corruption charges, thanked his many supporters for standing by him during his three-year ordeal, which included being incarcerated for eight months. Ellis said he felt vindicated by the Georgia Supreme Court’s recent decision to overturn his conviction on attempted extortion and perjury. The high court unanimously ruled Ellis’ conviction had to be overturned because he was not allowed to present evidence during his trial that he did not pressure vendors to give to his campaign.

Ellis’ attorney, Dwight Thomas, said such decisions are rare and Ellis was extremely grateful for the high court’s decision.

DeKalb County officials said Ellis will receive 225,556 in back pay. He will work until his four-year term ends on Dec. 31.

Ellis said he plans to focus on the 2017 budget and managing a smooth transition for his successor, CEO-elect Michael Thurmond, who take office in January.

Ellis also is planning a Community Heroes Award to recognize supporters and constituents that is expected to be held on Dec. 27. Details will be released soon, officials said.

nextComing Up: Events in Metro Atlanta