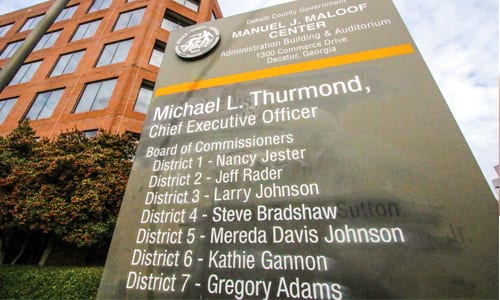 The DeKalb County Board of Commissioners (BOC) adopted a $1.2 billion amended budget for 2018 in a 6-1 vote on Feb. 27. The budget includes pay raises for county employees who haven’t had an increase since 2016, increases for minimum wage earners and raises for the board. The budget also ends deficit spending and creates a $75 million rainy day fund.

DeKalb CEO Michael Thurmond commended the board for its approval, saying the county is finally solving problems that have plagued the county for years.

“DeKalb County’s fiscal house is now in order and we are solving problems that have festered for years, if not for decades,” CEO Thurmond said. “We have worked collaboratively with the Board of Commissioners to improve the quality of life in DeKalb.”

Some residents, however, were not happy about the proposed salary increases  commissioners approved for themselves.

“I’m not against y’all having an increase in pay… but I think you need to take into consideration that you don’t have a boss, you’re not full time, the only thing you have to do is pass a budget and hear zoning requests. That’s pretty good… for a little better than $40,000 a year…But I want you to put it down besides what a policeman makes and if you think you’re twice as valuable as a policeman, by all means, vote yourself a raise,” said Arrington.

“…You have the nerve to say that you could not live off of $40,000 but you expect police and firefighters to live off of it as their main source of income,” said Coffield.

The starting pay for DeKalb Police officers is $38,000.

Jerry Jackson, who was wearing a red Santa Claus cap, said the commissioners’ pay raise “stumps the imagination.” The disabled military veteran said he survives off of about $1,700 a month.

Ed Williams said he would favor salary increases for the board only if there were office term limits, stating that some board members have been in office for over a decade.

DeKalb Commissioner Jeff Rader, who is Presiding Officer,  said the BOC last received a raise in 2004.

Here are highlights of the proposed budget:

•
Raises for all county employees whose salaries have not been adjusted since 2016 with a 3 percent increase in pay.

•
Establishing a minimum wage of $14 per hour for all full-time and regular part-time employees.

•
Increasing the number of sworn police officers on patrol from 706 (as of Feb. 14) by 155 positions above current staffing levels with expanded recruiting efforts.

Residential property owners will see lowered taxes from the passage of the Special Purpose Local Option Sales Tax (SPLOST) in 2017. One hundred percent of the proceeds from the penny tax, or $100 million, annually, will go toward reducing residential property taxes in DeKalb County and the 12 cities wholly contained in the county. In addition, $100 million in SPLOST funds will be allocated annually to repair and improve roads, bridges, libraries and senior citizen centers.

Commissioners modified the CEO budget proposal by adding funding for:

•
One position for magistrate court associated with blight efforts

•
Increasing the pay for grand jurors

•
Wellness programs in parks and recreation