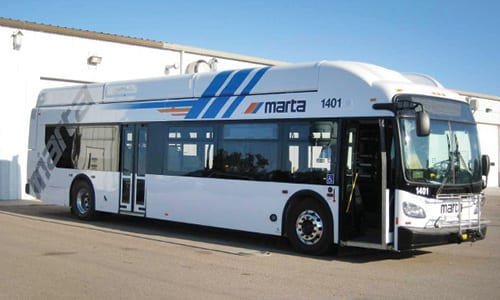 DeKalb County will receive $3.6 million in mass transit improvements through a federal grant issued to MARTA. The award will enhance public transportation in the county and includes new buses that are environmentally friendly, officials announced.

The funding from the Federal Transit Administration will upgrade and replace 40-foot diesel-fueled buses with 60-foot Compressed Natural Gas buses. The new buses will be stationed in central DeKalb County at the Laredo Bus Depot in Scottdale. They will be used to enhance service on MARTA Route 121, which connects riders to the Avondale Station and the city of Stone Mountain. The bus route travels the Ponce de Leon Avenue corridor and is one of DeKalb’s most heavily-used routes.

“This investment in DeKalb County transit infrastructure and rolling stock will begin to bring more service into south DeKalb County, while also improving the emissions with cleaner CNG fuel and improving our rider experience from the central into the eastern and southern segments of our county,” said DeKalb CEO Michael Thurmond.

Frederick L. Daniels, who represents DeKalb County on the MARTA Board of Directors, applauded the upcoming improvements.

“This grant will allow MARTA to provide more service in DeKalb County, along one of our busiest routes,”said Daniels.

Additional service expansions also are being developed in the DeKalb County Master Transit Plan under Thurmond’s administration with significant public and rider input.

Park-and-ride lots also will see upgrades, thanks to a $3.6 million grant awarded to the Georgia Regional Transportation Authority (GRTA).   The funding also will pay for the construction of a new operations and maintenance facility along I-20.

“As we build out More MARTA across the region, we will continue to partner and enhance existing service options with the jurisdictions in our core service areas. Our goal is to simply become and maintain the status of being one of the best transit and transportation systems in the nation,” said MARTA General Manager and CEO Jeffrey Parker.

The county, in partnership with DeKalb Municipal Association, has also engaged the Atlanta Regional Commission to produce a Transit Master Plan to provide a comprehensive vision for public transit in DeKalb. The Transit Master Plan will review additional public transportation service expansions and serve as Phase I of the DeKalb Comprehensive Transportation Plan Update that will be completed in 2019.