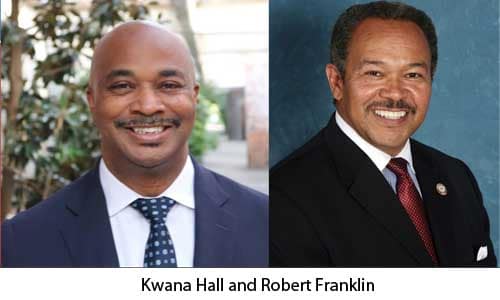 DeKalb Voter Registration and Elections (DeKalb VRE) has announced early voting has begun for Georgia’s 5th Congressional District special election runoff between Kwanza Hall and Robert Franklin. The winner will fill the remainder of the late Congressman John Lewis’ term for one month through Jan. 3, 2021.

Voters elected Democrat Nikema Williams on Nov. 3 to fill the full two-year term that Congressman Lewis, who died on July 17 at the age of 80, had held since 1987. Lewis had announced in late 2019 that he was battling stage 4 pancreatic cancer.

Williams defeated Republican Angela Stanton-King in a landslide victory to become the first female to represent the Fifth Congressional District.

DeKalb voters residing in the 5th Congressional District can cast their ballots in person, by mail or by drop boxes in and around the district during the designated early voting period. The runoff election is Dec. 1.

The only designated early voting location for the special election is the DeKalb VRE office located at 4380 Memorial Drive, Decatur.

“We understand that this special election may cause some confusion for voters who may have recently cast ballots just days ago,” said DeKalb County VRE Director Erica Hamilton. “This special election is only for voters residing in Georgia’s 5th Congressional District and will ultimately decide the immediate person to serve the remainder of the late Congressman John Lewis’ term.”

Drop boxes for absentee ballots for the special election runoff are now active and will remain open until Dec. 1, at 7 p.m. To request an absentee ballot for the 5th Congressional District Special Election Runoff, visit www.DeKalbVotes.com.