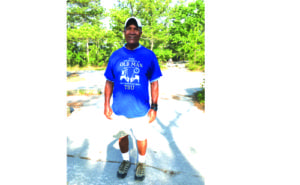 Just call Julius Lee the FitBit King. It has been three years since Lee met his goal of climbing Stone Mountain 20 times in one day, a feat that took him nearly all day and years of climbing to achieve. In April, the Conyers resident set a new record landing him first place in the Top 500 FitBit World Rankings, a monthly competition where FitBit wearers compete with one another in several categories of distance such as steps, floors and miles.

The Detroit native said that he purchased a FitBit for himself and his wife as Christmas gifts after Delicia Nwadike, a friend and regular climber at Stone Mountain, told him about the FitBit wristband.

“I was motivated by the thought, ‘How does what I’m doing compare in the world?’” said Lee.

A month after purchasing his FitBit, Lee joined two online FitBit leagues –70’s & Steady and 65 and Fit. After becoming a top leader in both groups Lee got excited.

“That did it, I was hooked! I did a search and found another league, Top 500 of April – FitBit World Rankings. The old competitive spirit got the best of me so I joined,” said Lee.

Already seven days into the competition, Lee joined the April challenge and quickly surpassed his FitBit peers, many of whom work out seven days a week.

“I do a minimum of six trips up and down the mountain which totals out to 18 miles a day, five times a week.”

Lee said he takes two days off to attend his weekly Kiwanis Club meeting on Tuesday and church on Sunday.

“During the last three days of the competition, there was one person who goes by the username PuPo who was within two “floors” from catching me, so I increased my trips up the mountain,” Lee said.

On Sunday morning before going to service at Ray of Hope Christian Church in DeKalb County, Lee learned after checking online that he had won first place in the Top 500 FitBit World Rankings April competition “floors” category.

“This was something I always dreamed of — being world class in something. I had no idea Stone Mountain would be that instrument. It was only through God’s power, grace and love for me that He gave me this goal-setting inspiration allowing me to push myself and receive such an awesome gift of accomplishment,” said Lee.

Lee, who will be 71 in a few weeks, said he will give his body time to recuperate but plans to compete again.

“My main motivation is to do the best I can and be an inspiration to others. I get joy when I hear people say you have motivated me and inspired me.

previousElisa retires from DeKalb County Board of Health

nextSummer Food Service Program is available to children throughout the state