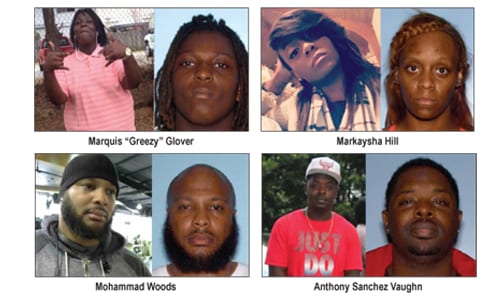 Conyers Police are asking for the public’s help in locating four suspects wanted for thefts throughout the City of Conyers and other jurisdictions.

Marquis “Greezy” Glover, 19, is wanted for the burglary of the American Legion concession stand where chips, pickles and sodas were stolen on Nov. 28.  Police are also seeking Glover for a pedestrian robbery on Bryant Street that occurred Oct. 29. Sgt. Kim Lucas said two juveniles who also were involved in the burglary have been arrested.

Mohammad Woods, 43, shattered a window of a vehicle in the LA Fitness parking lot at 6 a.m. on Dec. 13, stole a tablet and then checked in at the fitness center for a workout.

Any information leading to the arrest of the suspects may result in a cash reward of up to $2,000.

Tipsters will remain anonymous and are asked to contact Crime Stoppers with any information. Call 404-577-8477 or visit www.crimestoppersatlanta.org.

previousRockdale Sheriff’s Office launches “Lock It or Lose It” campaign