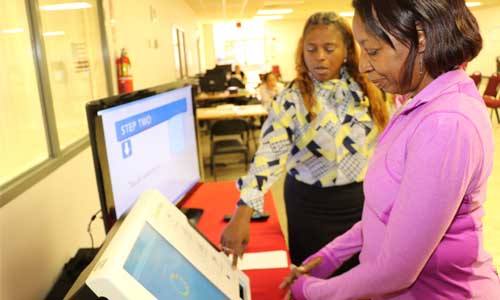 Rockdale County Elections Supervisor Cynthia Welch said her office is extending hours, 8 a.m. until 7 p.m., the last two days of the early voting period. Extended hours will be available on Thursday, Nov. 2, and Friday, Nov. 3, to attract more voters to use the new machines Rockdale is piloting for the state of Georgia.

Originally, Welch’s office was scheduled to be open from 8 a.m. until 4:30 p.m., Monday through Friday, during the early voting period, which runs Oct. 16 through Nov. 3. However, Welch said the hours for early voting were extended to allow people to get home from work and make it to the polls. On Election Day, Nov. 7, the polls will be open as normally scheduled–from 7 a.m. to 7 p.m., she said.

As of 4:30 p.m. on Oct. 19, the voter turnout was 112 for the City of Conyers general and special elections. Three candidates are running for mayor, and three council seats are unchallenged. The city has a total of 7,671 active voters, Welch said.

Welch said 96 voters had cast ballots in person, while 16 ballots had been issued by mail.

Rockdale was selected to pilot the Voter Express machines to gauge how well a small pool of voters could navigate the new system, said Welch, who projects a 12 percent turnout for Conyers elections. The new system allows voters to review a printed ballot before it is then placed in a tabulator. If a voter makes a mistake on a selection, he or she may turn in the ballot, receive a new one and start over.

Early voting for the Conyers elections is only available at 1400 Parker Road.

To confirm voter registration and for more information, Rockdale voters may call 770-278-7333.