With the countdown drawing near for Election Day on Nov. 7, the City of Conyers’ mayor’s race has intensified.

Meanwhile, the Secretary of State’s Office is looking into complaints that a post allegedly appeared on Godwin’s Facebook page offering $5 of free gasoline to the first 100 early voters. Rockdale Elections Supervisor Cynthia Welch said the law regarding free offers for votes is clear.

“Any person who gives or receives, offers to give or receive, or participates in the giving or receiving of money or gifts for the purpose of registering as a voter, voting, or voting for a particular candidate in any primary or election shall be guilty of a felony,” Welch said, citing the Georgia Code 21-2-570 (2016).

“It’s fine to give away freebies, as long as you give them to everyone. When you make offers specifically to voters and then ask them to provide their sticker and I.D. to take advantage of that offer, that’s crossing the line,” said Welch.

Godwin’s campaign officials have said it would be inappropriate to comment since the inquiry is underway.

So far, even with the drama, voter turnout has been low. Welch reported total voting as of Oct. 26 was 216 for the city of Conyers’ elections. The city has 7,671 active voters, Welch said.

Originally, early voting hours were scheduled 8 a.m. until 4:30 p.m., Monday through Friday, Oct. 16 through Nov. 3. Now, however, the hours have been extended on Nov. 2 and Nov. 3 from 8 a.m. to 7 p.m. to be consistent with other jurisdictions, said Welch.

“Hopefully, it will give people a chance to get to the polls after work and the turnout will pick up,” said Welch.

In-person voting is available at 1400 Parker Road, Lobby C. For more information, call the Rockdale Elections Office at 770-278-7333 or visit the web site at www.rockdalecountyga.gov. 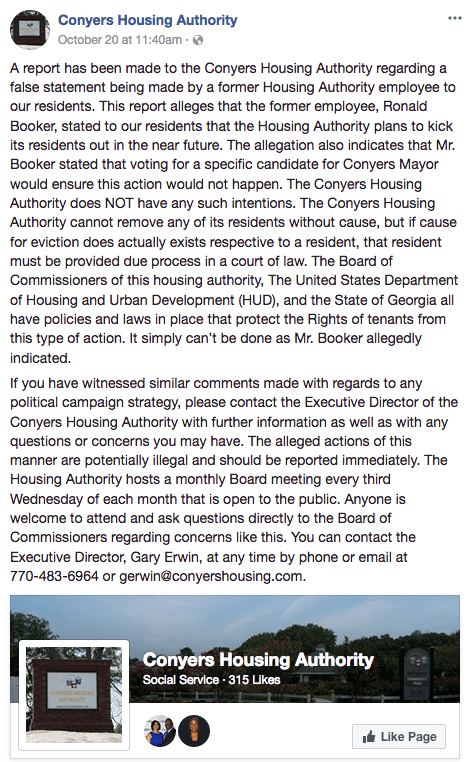