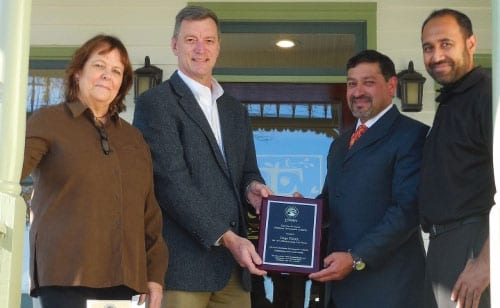 The Conyers Downtown Development Authority (DDA) presented its second annual Outstanding Achievement Award to Jorge Flores of the Law Office of Jorge Luis Flores for his efforts in preserving and beautifying his new office located at 951 Railroad Street in Olde Town, Conyers.

The building, initially a residence built in the late 1800s and since then utilized for a myriad of commercial uses including a funeral home, restaurant and antique store, was recently renovated by Attorney Flores. An Olde Town business owner since 2002, Flores said the building had extensive water damage when he purchased it and needed a new roof, painting, new siding, HVAC systems, a fire escape for second floor access, signage and lighting.

“The Conyers Downtown Development Authority Board wanted to recognize the attention to detail and restoration efforts of Mr. Flores and his contractors to renovate 951 Railroad Street. The new paint, trim, landscaping and signage are welcome improvements. Mr. Flores gave us a tour of the office and it was amazing the work and creativity that went into creating such a warm, inviting and contemporary feel to what was once an iconic Conyers restaurant, among other uses,” said Conyers Downtown Development Authority Chairman Daniel S. Digby.

This is the second year the DDA has presented the Outstanding Achievement Award to a business in Olde Town Conyers that has taken great care and consideration with beautification and preservation of buildings in the historic district. The inaugural awards honored the preservation efforts of the former Coca-Cola building at 882 Main Street. In addition, in 2016, the DDA awarded $6,000 in façade grant reimbursements to qualifying businesses in Olde Town Conyers, sponsored the e-station Conyers, Inc. co-working initiative and several events including the Olde Town Summer Film Series.