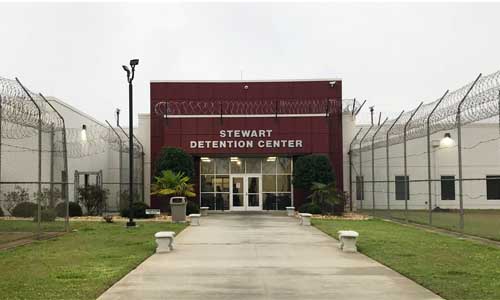 Congressman Hank Johnson (GA-04) is urging more protection to safeguard the health of immigration detainees and staff at the Stewart Detention Center in South Georgia.

The federal facility, run by CoreCivic, the largest for-profit prison company in the U.S., has a history of human rights abuses and poor operating conditions and is located near Dougherty County, according to watchdog groups. Doughtery ranks number 5 in Georgia with 1,567 confirmed COVID-19 cases and 126 deaths,  the latest statistics from state officials show. Doughtery is linked to two heavily-attended funerals where officials say the virus was spread, as well as an outbreak at the Doughtery County Courthouse, where staff members began testing positive for the virus including Probate Judge Nancy Stephenson, who died on April 1 from the virus.

Johnson expressed his concern over the potential spread of the virus in Daughtery. Stewart Detention Center, where undocumented immigrants often find themselves after falling into the custody of U.S. Immigration and Customs Enforcement (ICE), has about 2,000 detainees who live in open pods that contain up to 60 people on rows of bunk beds. Johnson said the close living quarters make the facility “incredibly vulnerable” to the spread of COVID-19 among detainees.

“I am concerned that the proactive steps being taken by ICE may not be sufficient to protect the almost 2,000 detainees inside the facility,” Johnson stated in a letter that was sent today, May 7, to Matthew T. Albence, Deputy Director U.S. Immigration and Customs Enforcement.  “…It is likely that hundreds of detainees will become infected.”

“…If an outbreak were to happen, it would only add to the long list of human rights abuses reported at the Stewart Detention Center,” Johnson said.