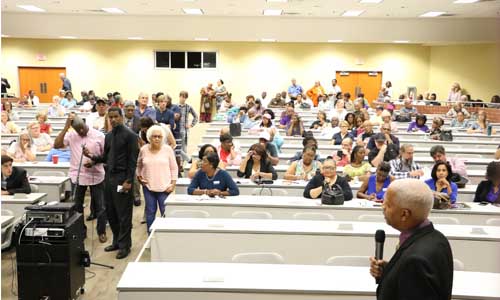 District 4 Congressman Hank Johnson reached thousands of residents in person and via Facebook live during his “Moving The Fourth Forward” town hall series. The town halls, which began at the Lou Walker Senior Center in DeKalb County on Aug. 13 concluded at the Newton County Historic Courthouse on Oct. 10.

Johnson, who represents all of Rockdale County and parts of DeKalb, Gwinnett, and Newton counties, heard from the public on a host of issues during the town hall meetings—from global warming to the impeachment inquiry underway against President Trump. The Democratic Congressman even heard from a Republican at the Oct. 8 Rockdale town hall meeting who announced her plans to run for his seat in 2020. Johnson drew laughter from the audience when he said he was afraid to ask if there was anyone else in the audience running for office.

The Rockdale meeting drew about 300 people at the Rockdale Career Academy. Johnson’s office said nearly 3,000 people watched the video of the recorded meeting via Facebook live with about 700 leaving comments.

The most popular issues at the Rockdale  meeting were the impeachment inquiry concerning President Trump, immigration and patent law. Johnson also discussed the proposed Safe Roads Act of 2019(H.R. 3773) after a constituent told him the legislation, with its hefty insurance liability requirements could put her small trucking business out of business. The legislation would require commercial trucks to equip their fleets with automatic braking systems as a way to curtail fatalities on highways and would require trucking companies to have a minimum insurance liability of $5 million.  Johnson said the legislation was proposed after five Georgia Southern University nursing students were killed in April 2015. Truck driver John Wayne Johnson failed to press his breaks, causing a seven-car crash.

“It’s been at $750,000 for decades,” Johnson said, referring to the existing insurance liability rates for truck drivers. “It hasn’t kept up with the times, and inflation…  Perhaps there is some way we can adjust it for small businesses. I’m all about the small guy, the little guy,” said Johnson, who co-sponsored the bill.

At the Oct. 10 town hall, which was held at the Newton County Historic Courthouse, impeachment also was a hot issue, as well as immigration. There was a lot of back and forth about the way Trump is running the white house and some republican voters wanted the Congressman to investigate his rival and former Vice Democratic President Joe Biden instead of moving forward with the impeachment of Donald Trump.

The Newton County town hall video has had about 2,000 views and about 300 comments and/or people actively engaging during the video. You can view a photo album of the town hall here.

You can view a photo album from the Rockdale town hall here.

You can view a photo album of the Newton town hall here.

To reach Congressman Hank Johnson about an issue or concern, e-mail hankjohnson.house.gov or contact his office at

nextMayor Jason Lary’s bid for re-election: ‘Our future is bright in Stonecrest’