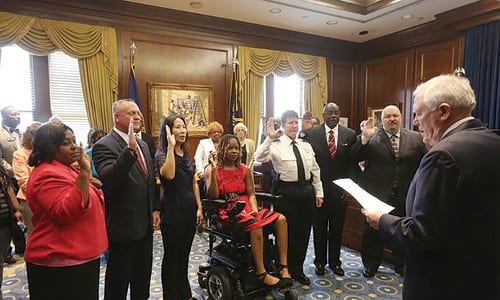 Chief Hudson began her law enforcement career in 1983 with the DeKalb County Sheriff’s Department. Hudson left the Sheriff’s Department and went to work as a patrol officer for the City of Decatur Police Department. During her tenure with the Decatur Police Department, Hudson was ultimately promoted to the rank of Police Major in charge of the Criminal Investigation Division. In 1991, the Georgia Women in Law Enforcement honored her as the DeKalb County Officer of the Year. That same year, she also was honored by the Georgia Bar Association as “Officer of the Year” for DeKalb County.

Hudson has co-authored an article titled “A Small City’s Approach to a Big Drug Problem,” published in the Law and Order magazine.

In February 2005, Hudson was recruited to travel to Baghdad, Iraq to train the Iraqi Police. While there, Hudson became a Team Leader to the American contractors who worked with the Iraqi Major General in charge of Internal Affairs for all of Iraq.

Hudson began her tenure with the City of Clarkston in 2009 as a Lieutenant and was promoted to the rank of Captain then promoted to Chief of Police in January 2012.

Hudson is a member of the Georgia Chiefs and International Chiefs Association. Hudson is currently serving as the President of the DeKalb Chiefs Association. Hudson has spent her career serving others and has a particular passion for those who are disadvantaged by their circumstances. Hudson has developed a reputation for being unafraid to stand up for defenseless victims, especially victims of family violence.

GCFV is a state agency that strives to provide leadership to end family violence by promoting safety, ensuring accountability and improving justice for generations to come. GCFV holds four meetings each year across the state. Please visit www.gcfv.ga.gov for information regarding future meetings.

If you or someone you know is being abused, there are community and statewide resources available to you. Call 1-800-33-HAVEN, the toll-free, 24-hour hotline, for a confidential place to get help or find resources.