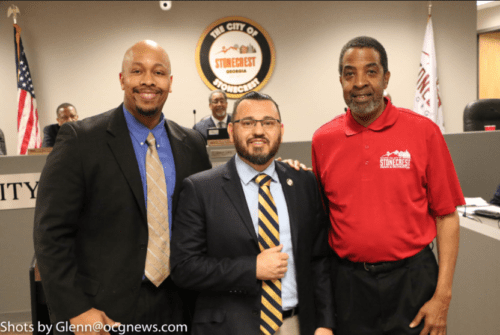 Pictured left to right: Brandon Riley, Sean DePalma (center) and Sheldon Fleming who  are taking on new roles in parks and recreation, during a City Council meeing in 2019. Photo by Glenn L. Morgan
Stonecrest Mayor Jason Lary announced at the City Council meeting on June 8 that Sean DePalma is returning to Florida where he has been named Quality of Life manager overseeing Panama City, FL parks and recreation..
DePalma started his new job last week.
Lary honored DePalma virtually during the ZOOM livestream meeting, commending him for the work he has done as the city of Stonecrest’s first Parks and Recreation Director.
“He has made a life decision to move to Panama City, Florida. We’re going to miss him tremendously. He is like family to us,” said Lary.

Lary said he deeply appreciated DePalma’s leadership and the caring concern that DePalma demonstrated toward him. The mayor said recovering from prostate cancer was one of the most challenging issues he has ever dealt with and DePalma was one of the city’s staff members who checked on him daily during his recovery.

DePalma, who formerly served as parks director of Fort Myers Beach, FL, was named the city of Stonecrest’s parks and recreation director in January 2019.

DePalma said he was glad to have played an integral role in the evolution of the 3-year-old  city’s parks and recreation system, laying the foundation for world-class services and programs while building a solid team of staff members.

“The team we have at Stonecrest is world class, topnotch, very unified, and they’re solid…,” DePalma said.

Mayor Lary said that Brandon Riley has been promoted to succeed DePalma. Riley, who served under DePalma as operations manager, formerly was Executive Director of the DeKalb Boys & Girls Club before he was hired by the city in April 2019.

Sheldon Fleming, who has served as Recreation Lead since 2019, will move up to Operations Manager, the mayor said. Fleming formerly served as executive director for the former Wonderland Gardens in South DeKalb.

The city of Stonecrest will continue to work with DePalma , the mayor said, for a period of time as a part-time consultant on projects that he had initiated before his departure.