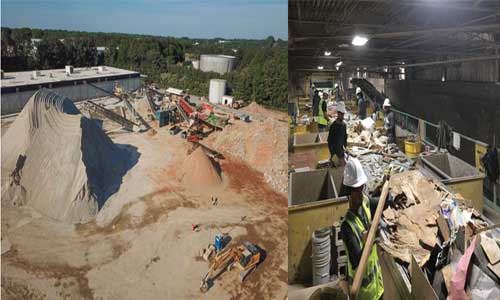 The city of Stonecrest is launching an investigation into the permitting of a Metro Green recycling plant in an effort to stop the construction of the project. The project has raised strong opposition from angry residents who say it would pose a health hazard, have a negative environmental impact and lower property values.

The Stonecrest City Council approved a motion to launch  the probe in a 6-0 vote at a special called meeting last night (July 9). The council agreed to have Councilmembers Rob Turner and Jimmy Clanton, along with City Planning Director Chris Wheeler and the law firm of Fincher Denmark, LLC to conduct the probe. Turner, who represents District 2, agreed to serve, saying he wanted to scrutinize every aspect of the project because it sits in his district. Clanton also expressed his desire to participate in the probe because he represents District 1, which includes several designated industrial areas.

Pressure to stop the project has been mounting since bulldozers began clearing the land at 5152 Snapfinger Woods Road in March. Residents thought homes were going up at the site. They became concerned that dust particles from concrete, drywall, plastics and other materials would pollute the air after learning that construction debris would be hauled in and recycled six days a week, Monday through Saturday, 7 a.m. to 7 p.m.

The city issued a stop work order for the project on July 1, saying “there appears to be a discrepancy regarding the facility’s failure to meet DeKalb County’s Solid Waste Plan.” City officials say construction crews have been leveling off the site to prevent any erosion while the city determines what next steps it should take.

“We cannot enforce a stop work order indefinitely with no ending in sight,” said Councilmember Rob Turner. “Our goal is to revoke the permit. We’re going to look at this whole process, how it happened.   They got a permit from EPD and it didn’t come before the City County. We don’t want this in our community.”

Metro Green has two recycling plants in the metro Atlanta area. According to the company’s web site, over 3.2 million tons of construction debris have passed through its facilities, diverting materials from landfills, since it began operating in 2012.

Meanwhile, State Rep. Doreen Carter said she is pleased the City Council voted to launch an official investigation into the matter. Carter and State Sen. Emanuel Jones held a virtual community town hall meeting on July 1 after receiving complaints from residents demanding that the project be halted.

“A big concern is that there are a lot of residents who live in unincorporated DeKalb along the border of the city of Stonecrest who were never notified about this project,” said Carter.

Carter said she was contacted on May 21,2020 by Tony Wilson, a 30-year resident of the Windsor Downs community, which is located on Miller Road directly across the street from where the plant is going up. Carter said Wilson and others knew nothing about the project until they noticed construction crews clearing away the land.

During Carter’s meeting, an official of Metro Green, LLC, said a public meeting concerning the project was held in October 2018, which was attended by two people, as well as a public hearing, which was attended by 15 people. One person voiced opposition but no one spoke in favor of the project, officials said. The meetings, Metro Green’s Bernie Tokarz said, were required to secure permits from the Environmental Protection Division (EPD) of the Georgia Department of Natural Resource. The EPD is charged with protecting Georgia’s air, land, and water resources.

William Cook, an EPD official who works in solid waste management, said during Carter’s town hall meeting that Metro Green had obtained the necessary documentation to secure the permit including holding the two public meetings and securing letters of support from former acting City Manager Michael Harris and Mayor Jason Lary. However, DeKalb County, which has an intergovernmental agreement to oversee waste management in the city of Stonecrest, said the project would not be in compliance with the county’s regulations.

Attorney Annamaria Hazard, who spoke at the city’s special called meeting, said that Mayor Lary did not sign off on the solid waste management plan. Rather, the mayor’s letter referenced that the proper industrial zoning was in place for Metro Green to proceed.

“The first step in this process dealt with the zoning. It basically said that the property was properly zoned for a recycling center,” Hazard said.

Reached today (July 10) by telephone, Lary said the land has been zoned for industrial use for years—long before the city of Stonecrest was incorporated over three years ago. He said the city inherited the patchwork zoning.

“Not only was that land (where the recycling center is being built) already zoned for industrial use, but so was the land where the Miller Woods subdivision now exits. Years ago, the DeKalb Board of Commissioners rezoned a portion of the land to allow the subdivision to be built, but the industrial zoning remained for the rest of the land,” said Lary.

Councilman Clanton said the bottom line is the recycling plant is unwanted and the city must determine what steps must be taken next to protect citizens from the development.

“We’re going to have to look at this one closely and prepare for future developments. We must enact policies and rules to make certain this doesn’t ever happen again,” said Clanton.