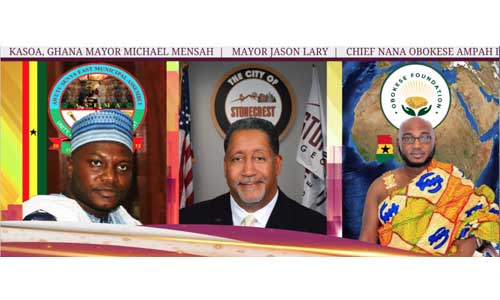 The City of Stonecrest and Kasoa, Ghana officially became sister cities on today (Aug. 19) during a virtual conference that was held via Zoom.

Stonecrest Mayor Jason Lary and Kasoa Mayor Michael Mensah signed a Memorandum of Understanding to forge a friendship to promote common prosperity, and open the channels for cultural exchange, tourism, education, and other opportunities to benefit citizens and businesses in both cities.

“It’s an honor to share our different operational and municipal ideas. Mayor Mensah and I are committed to growing this relationship to a world-class opportunity between our countries,” Mayor Lary said.

Lary said that for several years now, the city of Stonecrest has been working to form relationships with emerging cities in different countries, starting in South America in 2018.   Stonecrest formed sister relationships with the Capitol of Georgetown, New Amsterdam and Linden, Guyana, and then moved forward to the continent of Africa to form a relationship with Ghana.

Al Franklin, the City of Stonecrest’s senior director of community and cultural affairs, set up today’s virtual meeting between Ghana and Stonecrest officials.

Franklin said the city began working to form a relationship with Ghana in March. The relationship, he said, can be credited to Nana Obokese Ampah I, a chief of the Asebu Kingdom of Ghana, who traces his lineage back to ancestors who were with Moses when he parted the Red Sea.

Franklin said the chief was in the U.S. on a business trip in May and wanted to meet Mayor Lary because of Stonecrest’s historic incorporation as the largest majority African-American city created since slavery.

Franklin said he arranged the meeting between the mayor and the chief.

“This Sister City paves the way for collaboration through commerce, culture, education, and making government more efficient for both cities by sharing best practices,” said Franklin.