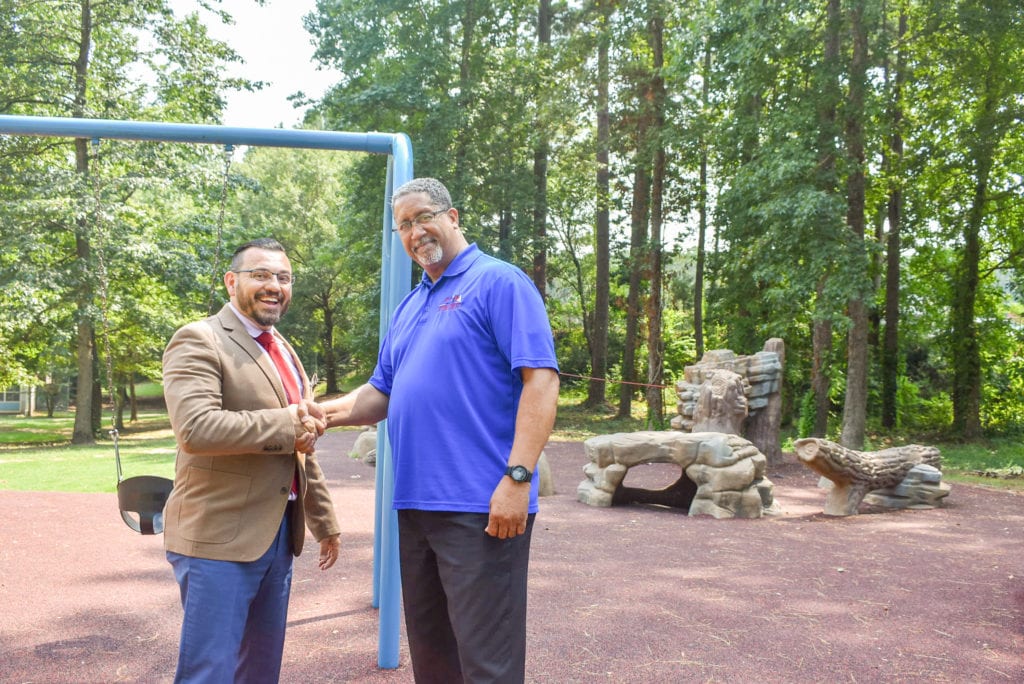 Aug. 1 officially marked the city of Stonecrest’s takeover of parks as one of three services, including planning and zoning and code enforcement, mandated under the new city’s charter. The city began renovations at Browns Mill Recreation Center and the process to purchase nine parks that are located in the city from DeKalb County.

The city is spending $34,950 for the nine parcels. Previously, the city had discussed purchasing Panola Shoals Park.  City officials decided, however, to package Panola Shoals Park with the Arabia Mountain National Heritage because of the park’s close proximity to Arabia.  Arabia is not a part of the quick deed process currently underway to buy the parks from DeKalb County, officials said.

Sean DePalma, the city’s parks and recreation director, said upgrades at Browns Mill will be followed by landscaping at the facility. DePalma said the upgrades are required for the city to obtain licensing from the state’s Bright from the Start agency so the city’s selected vendor, the South DeKalb YMCA, can oversee Browns Mill’s afterschool program.

The city council approved a memorandum of agreement (MOA) on July 22 for the Y to run the program after DePalma made a presentation comparing services and costs provided by the Y and the Boys and Girls Club of Metro Atlanta.

The Y proposed weekly participant fees of $50 and reduced fees to zero costs for low-income families eligible for subsidized care through Georgia’s Childcare and Parent Services (CAPS). The Y offered to provide a snack and hot dinner to students enrolled in the afterschool program and estimated program expenses at $176, 366. The Y said, however, it would not charge the city for running the program and instead would cover its expenses through participant fees.

The Boys and Girls Club of Metro Atlanta proposed participant fees of  $60 to $135 for the school year, membership on a sliding scale fee for families for the school year and a snack. The club  said it would charge the city $201,473 to run the program.

DePalma said he met with Browns Mill Rec’s instructors and vendors earlier this month to inform them of the temporary closure of the facility during renovation and to discuss the city’s vendor process.

DePalma said students would attend the afterschool program at the Y during renovation and would move to the Browns Mill Rec Center after the city receives licensing from Bright from the Start. DePalma said the students likely would be at the Y facility for about six weeks. Transportation will be provided to pick up students from school, he said.

Communications Director Adrion Bell said the city plans to soon begin removing unsafe playground equipment from Salem and Gregory Mosley parks.  The playground equipment at all of the city’s parks has been inspected by an in-house certified inspector and an outside inspector, both of whom have federal credentials.

“In addition, over the years, the county has modified the playground equipment beyond the manufacturer’s design; therefore, it is in the city’s best interest to remove the equipment for safety and liability reasons,” DePalma said.

Mayor Jason Lary said that he is confident in DePalma’s assessment. “I believe that Sean DePalma and our entire parks and recreation staff share my vision for a parks system that is safe and adds to the quality of life for our residents, especially our children.  We will upgrade our recreation center and replace the worn-out equipment with quality playground equipment that is enjoyable and, most of all, safe,” Lary said.

DePalma said a Parks Masterplan will be conducted by an independent firm later this year.  The plan will assess the needs and make recommendations for new playground equipment in all the city’s parks as well as assess the community’s desires for future facilities and activities.

Browns Mill Recreation Center will be closed to the public beginning Aug. 1 and will reopen on Monday, Aug. 12.

next100 Black Men of DeKalb to honor eight students with scholarships