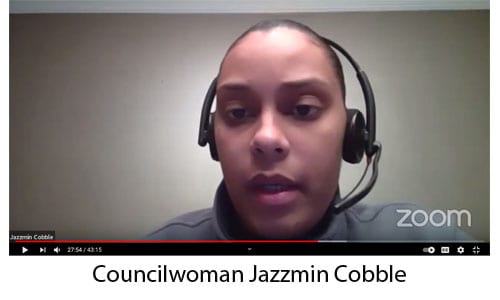 STONECREST— City Council member Jazzmin Cobble has been dealt blow after blow from the corona virus. Cobble said she recently contracted the virus, along with her husband and their young son. The Cobbles survived their battle with the virus, but they lost two family members.

“We have had a very difficult four to five weeks, starting with the passing of my aunt.  My family—my son, my husband and I—tested positive for COVID, and then two short weeks later, we lost my grandmother. Just buried her Saturday. So, it’s been a rollercoaster ride for us for sure,” Cobble said at the Jan. 25 City Council meeting.

Cobble made the remarks toward the end of the council meeting as she thanked constituents, friends and the community at large who have reached out to show her and her family concern and offer their condolences. She said she was “amazed” at the outpouring of support that she has received.

“So I wanted to say thank you very much… for your well wishes, your condolences and just checking in on my family…” Cobble said.

“No issues. She was just old until COVID came and took her out,” said Grimes.

“COVID is real, guys, and I know we’ve all said it but it doesn’t get any more real when it sits on your front door steps or it sits around your family,” said Grimes.

Grimes, an educator with the DeKalb County School District, also made a plea for the community to pray for teachers. Fear is raging as the pandemic continues and some educators have died after contracting the virus in local communities.

Mayor Jason Lary: The pain “felt like an elephant sitting on my chest”

Jason Lary also spoke about his recent battle with COVID-19 while battling cancer, saying the pain felt “like an elephant sitting on my chest.”

Lary said he contracted the virus at a city function in November where recipients received their grants for COVID-19 relief funding. The mayor said he came down with the virus after attending the event.

“I know where I caught COVID: when I shook this woman’s   hand just for her to receive her individual grant. But I did it anyway and then they called us and told us that she had COVID. Two days later, I got a fever. On my back!” said Lary, who often wears a mask and a face shield.

Lary said during an interview with On Common Ground News that unfortunately, health risks now come with public service in the wake of COVID-19. Lary said despite those risks, however, he has found it rewarding to assist businesses, houses of worship and residents in the city of Stonecrest with food and necessities during the pandemic. He credited Senior Director of Economic Development Clarence Boone, Chief of Staff Iris Settle and Business Development Director Will Settle with playing a major role in the city’s efforts.

George Turner felt the devastation of the virus early last year when the sheltering-in-place orders began taking place around the country. Turner’s 35-year-old nephew, Nick, who lived in Sacramento, CA died from the virus on March 23, 2020.

“He got sick, went to the hospital and the next day, he was gone. Bam. Just like that,” Turner recalled during an interview with On Common Ground News. “We never expected that.  His mom—my sister—couldn’t even get to him because they were not letting people into the hospitals. The hardest part was that we couldn’t have a funeral for him. He was cremated. We had a Zoom memorial service for him in June on his birthday.”

Turner said as the family was dealing with the death of his nephew, his 77-year-old sister, Doretha, who lives in New York, contracted COVID. She spent over 45 days in the hospital.

“It was touch-and-go but she survived. She pulled through,”  Turner said.

“I want people to know this thing is real. I’ve seen it firsthand. I have lost about 10 of my frat brothers to COVID-19. This is nothing to play with,” said Turner, who is urging everyone to get the COVID-19 vaccine when it becomes available to their age group.

Turner said he had to try seven or eight times to register online for the vaccine. He finally got through and was administered the vaccine last week at the former  Sam’s Club, which will become the new Stonecrest City Hall.

Megan Reid considers herself one of the lucky ones.

“I’m lucky that I only lost my sense of smell. A lot of people have lost their lives,” said Reid, who contracted COVID-19 in October 2020, along with her husband, and their 15-year-old son. The Reids’ 13-year-old daughter was spared and had to go live with an aunt while the rest of the family was quarantined at home.

“My husband was sent from work with a fever on Oct. 28.  We all tested positive, except my daughter,” said Reid, who wasn’t able to return to work until Nov. 23.

During quarantine, her husband’s job left a box of food on their porch and Uber drivers made meal deliveries because they were so weak. Reid said the family experienced fevers, headaches, coughs and were extremely lethargic.

“I lost my sense of taste and smell. Everything tasted like hot water. I couldn’t smell anything.  I still don’t have my sense of smell back,” Reid said.

During quarantine, Reid wound up at the hospital on Nov. 13. She said she couldn’t stop coughing and the pain was overwhelming.

Business Development Director Will Settle: ‘I sweated it out’

Will Settle says he felt like he was coming down with the flu the day after Thanksgiving.  He had a runny nose and he was a little hoarse and then the chills and fever kicked in.

He took a COVID test on that Monday and three or four days later, he tested positive for the virus.  However, by the time the test results came back, he had already quarantined himself.

“I think I probably got it from the same person as the mayor did,” said Settle. “We had received notification that she tested positive and I had started my own treatment. I rubbed myself down with White-Over-Proof rum that I keep for medicinal purposes. I wrapped up in a blanket and sweated it out.”

Smith said he was very tired for a couple of weeks.  He, like City Clerk Megan Reid, also lost his sense of taste and smell. But he said his sense of smell is returning.

“I’m just lucky. I don’t know how the virus selects people and takes them out. I had asthma as a child and I was allergic to just about everything, but I was able to beat the virus,” said Settle.   “My plan is to get the vaccine. I would advise everyone to get it. Trust the science.”