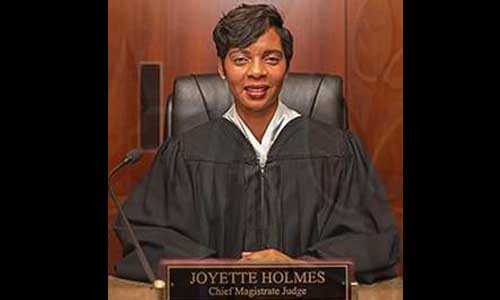 Attorney General Chris Carr today announced he will formally appoint Cobb County District Attorney Joyette M. Holmes to lead the prosecution of Gregory and Travis McMichael, a father and son who have been charged with aggravated assault and the murder of Ahmaud Arbery.

“I appreciate District Attorney Tom Durden’s involvement in the Ahmaud Arbery case,” said Attorney General Chris Carr. “This case has grown in size and magnitude since he accepted the appointment on April 13, 2020, and as an experienced District Attorney, Tom has recognized that another office is better suited from a resource perspective to now handle the case. As a result, he has requested our office to appoint another District Attorney.

Holmes is set to become the third prosecutor assigned by the state to the Arbery case. Tom Durden, DA of the Atlantic circuit, will step aside. Last week Durden announced he would ask a grand jury to consider criminal charges against Greg and Travis McMichael. The duo cornered Arbery, with the help of third man, as the 25-year-old jogger ran through their subdivision just south of Brunswick.

Brunswick DA Jackie Johnson recused herself because Gregory McMichael formerly worked for the District Attorney’s Office.  The case was then assigned to George Barnhill, who, along with Johnson, are now the subjects of a federal investigation into their handling of the Feb. 23, 2020 fatal shooting of Arbery.

nextGeorgia Gov. Kemp to give update on COVID-19 May 12