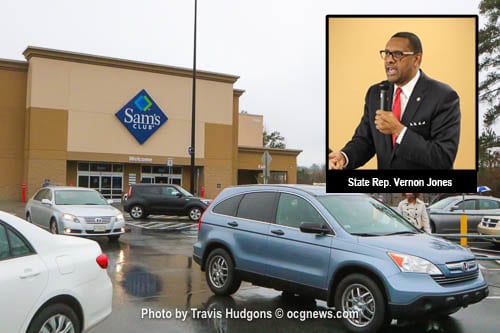 State Rep. Vernon Jones said that he is working with city officials to seek legal action against Sam’s Club.

Jones said Sam’s Club violated the Federal Worker Adjustment and Retraining Notification Act (WARN) when it abruptly closed the Stonecrest store on Jan. 11, and could face penalties for failure to properly notify workers and city officials of the massive layoffs.

“This has been sloppy from Day 1,” Jones said. “Sam’s Club violated the federal WARN Act. I will be talking with legal counsel, officials, the community as well as employees affected. They failed to properly notify the state and local government, which is a direct violation of the federal WARN Act.”

Jones said officials of Walmart, the parent company of Sam’s Club, never mentioned the “WARN” when questioned about the shutdown during a town hall that he held on Jan. 16 to discuss the closing. Glenn Wilkins, public affairs and government relations manager for Walmart, said there was no prior warning to workers and the public that the store was closing. He said the store was underperforming financially.

Wilkins said the employees are being paid for the next 60 days. They’re getting double pay for the next two weeks. They will get a 2017 bonus, plus a one-time bonus. He said some employees were offered the chance to work at another Sam’s Club or Walmart.

Stonecrest Mayor Jason Lary, who should have been notified because the store is in the city of Stonecrest—not Lithonia, never received a letter.

Jackson said, however, she didn’t receive the letter until Jan. 16—five days after the closing.

“I thought they were just sending it to me as an FYI,” said Jackson, who said she didn’t know if the city of Stonecrest or any other elected official in the district had received the notification. Jackson said she didn’t forward the letter to anyone because by the time she received it, the information was already national news.

Jones said Sam’s Club Jan. 11 notification letter would not have been sufficient even if it had gone to Lary because state and local officials should have been notified 60 days prior to the shutdown as stipulated by federal law. There are three exceptions to the 60-day notification defined by the WARN Act: faltering company; unforeseeable business circumstances and natural disaster.

“They should have sent the notice in November—and they didn’t do that,” Jones said.

The letter states in the subject line that this was a “facility closure pursuant to the Worker Adjustment and Retraining Notification Act (WARN).”

An employer who fails to provide notice is subject to a penalty not to exceed $500 for each day of violation, according to the guidelines of the WARN act.

The Stonecrest Sam’s Club was the only Georgia store closed of the 63 closed nationally, all on Jan. 11.

Copy of letter sent by Sam’s Club below: previousStonecrest Toys “R “Us to remain open, Babies “R” Us is closing

nextStonecrest Babies “R” Us is closing