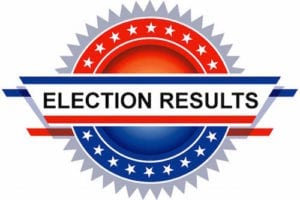 “I am overjoyed by this outpouring of support. I can’t begin to tell you how grateful I am,” Bradshaw told the standing room-only crowd who joined him for his victory celebration at the Village Corner restaurant in Stone Mountain.

DeKalb Tax Commissioner Irvin Johnson defeated contract attorney Susannah Scott with 15,142 votes (58.82%). Scott came in with 10,600 votes (41.18%), according to early results. Johnson won both a special election to fill the position for former Tax Commissioner Claudia Lawson for the remainder of the year as well as the Democratic Party primary for the four-year term that starts in January. Johnson does not face any opposition in November’s general election.

Nesbitt is expected to face Courtney Dillard, who is seeking to run as an Independent in November. Election officials must verify signatures and addresses on Dillard’s petition as an Independent before his name can be placed on the ballot, said Elections Supervisor Cynthia Welch.

“I give thanks to God, my wife, Robernett, and the voters of Rockdale County,” said Nesbitt. “I think people in Rockdale County saw a real genuine person who cares about the people—not some guy on a pedestal looking down on them. For eight years, the No. 1 thing I prided myself on is being accessible. I was never a stranger at the churches that I visited. I didn’t go to campaign; I went to worship.”

Nesbitt said he plans to continue working hard all the way until November where he may face the Independent challenger, Dillard. He said he is putting together a readiness team that will be comprised of citizens representing all demographics in the county.

“When I’m elected, I’m looking forward to a smooth and professional transition from the current chairman, Richard Oden,” said Nesbitt.

At deadline, it appeared that Anderson would face Republican candidate JaNice Van Ness in November.

Results for all of the races must be verified and final numbers will be posted to the Georgia Secretary of State’s website.