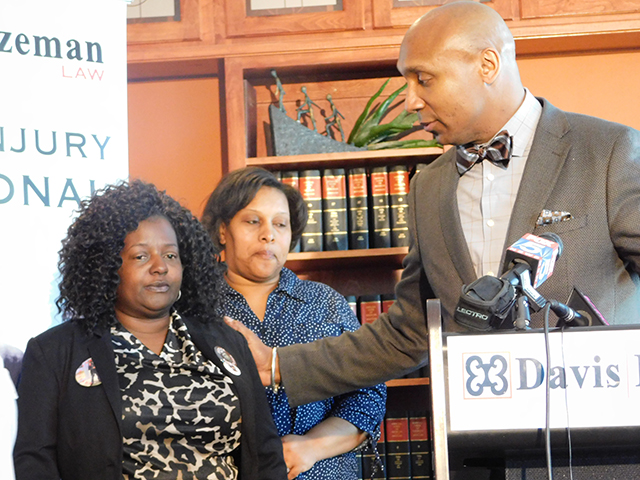 Attorney Mawuli Davis, who is representing the family of Shali Tilson, the 22-year-old mentally ill man who died of dehydration while in the custody of the Rockdale County Jail, is holding a news conference at 10:30 a.m. today at the Rockdale County Courthouse.

Davis said he plans to address District Attorney Alisha A. Johnson and the Special Grand Jury’s report, which was released on Wednesday, Sept. 25. The Grand Jury’s four-month investigation concluded the Rockdale County Sheriff’s Office and its jail administrators did not criminally cause Tilson’s death.

Tilson died of dehydration on March 12, 2018 after being arrested on March 3, 2018 for disorderly conduct that he was experiencing due to mental illness. He expired naked in a padded cell after pressing a call button for help that didn’t work.  Davis and the family recently made public a video provided by a whistler blower showing Tilson’s final moments before his death.

“The family is devastated that no one will be held criminally liable for Shali’s death. However, the struggle for Justice for Shali is far from over,” said Davis.

Johnson, who released the findings of the Grand Jury’s 84-page report on Sept. 25. Johnson said in her state, which accompanied the report:

“The Grand Jury found that medical, mental health and jail staff, through complacency, reluctance, assumptions and lack of procedures, training, leadership and adherence to policy, failed to recognize and adequately address the mental state and physical decline of Shali Tilson.  In addition, the Grand jury found that under the totality of circumstances, the administration failed to live up to its responsibility of ensuring the safety and well-being of Shali Tilson while detained and confined in its jail. This played a significant role in failing to prevent the death of Shali Tilson.

“They murdered him. They knew that the call button didn’t work and they never did anything about it,” said Josie Dean, who said she is a member of the Sheriff’s Office SPLOST board, which oversees special purpose local sales option tax spending.

Dean further stated that the District Attorney should have moved for a Special Grand Jury outside of Rockdale.

“We don’t know who sat on that board and who is related to who when it comes to the Sheriff’s Office. There are too many people in Rockdale who have lived here all of their lives and know one another.

We also don’t know if they ever saw the complete (surveillance) tape at the jail because it was not working all of the time,” Dean said.

previousCelebrating Lou Walker Day in the City of Stonecrest