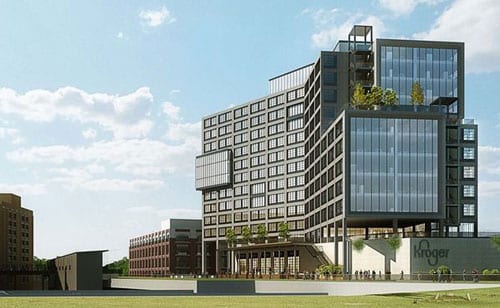 Atlanta city officials say over 3,500 jobs will be created as a result of the mixed-use development called 725 Ponce.   .

The Kroger is being demolished to make way for the $188 million development, located along the Atlanta BeltLine’s Eastside Trail. The project will bring an urban and modern 60,000-square-foot Kroger store and approximately 360,000 square feet of mixed-use development to fruition.

“We are proud to break ground on 725 Ponce, a development which promises to have a valuable and significant impact on the quality of life in this thriving neighborhood,” said Mayor Kasim Reed. “This new development will bring more than 2,000 construction jobs and approximately 1,550 permanent office and retail jobs, welcoming a new, diverse population who can enjoy all what the community has to offer. I’m certain 725 Ponce will create the same kind of inclusive, urban energy we see every day on the Atlanta BeltLne and at Ponce City Market. I would like to thank Jim Irwin of New City for his company’s investments in 725 Ponce and commitment to Atlanta.”

The 725 Ponce tower includes approximately 350,000 square feet of office space and 10,000 square feet of retail space. In addition, the tower and new Kroger will be constructed on top of a three-story underground parking deck, which will fill a need for additional public parking near the Atlanta BeltLine, Ponce City Market and Old Fourth Ward Park.  Atlanta development firm New City Properties and The Kroger Co. reached an agreement to close the Kroger store in October 2016, following New City’s purchase of the last 5.5 acres of land needed to build the development. The property is expected to yield an estimated total economic development impact of $268 million.  New City was founded by Irwin, who previously served as a Senior Vice President at Jamestown Properties and led the redevelopment of Ponce City Market.

“The 725 Ponce project is the largest investment in new construction on the Atlanta BeltLine to date and would not have happened without the vision of Mayor Kasim Reed,” said Irwin, Founder and President of New City Properties. “I am incredibly grateful for his support and leadership.”

In 2011, the City of Atlanta sold the former City Hall East to Jamestown Properties for $27 million. Jamestown Properties invested more than $300 million into the 2 million square-foot building, transforming the property into Ponce City Market, a mixed-used development with national and local retail anchors, restaurants, offices and residential units. Since that time, the area surrounding Ponce City Market and the Atlanta BeltLine Eastside Trail continues to experience economic development and revitalization.