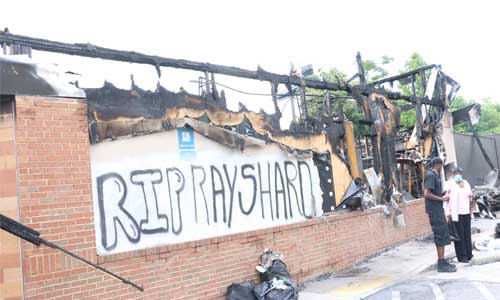 Photo essay by Will Thomas/Special to On Common Ground News

ATLANTA—Photographer Will Thomas captured these images in the aftermath of protests for Rayshard Brooks, the latest black man to die at the hands of a white police officer.

Protestors gathered  at the scene where the 27-year-old black father was fatally shot in the back by a white Atlanta police officer on June 12.  Only a shell of the Wendy’s was left.Makeshift memorials of balloons, flowers, and cards have been set up at the site. A “Black Lives Matter” T shirt was draped on one of thememorials. Demonstrators held posters of victims who have been shot by the police.

Tensions have escalated across the country as protestors demand justice for police brutality against blacks.

Authorities said Brooks had fallen asleep in his car at the Wendy’s drive-through, causing other customers to drive around him.

Police were dispatched to the Wendy’s, spoke with Brooks and then conducted a sobriety test. Video footage of the incident shows that the two police officers got into a scuffle with Brooks.  Brooks broke free during the scuffle, grabbed a taser from one of the officers and began to run away. Brooks fired the taser in the direction of the officers as they pursued him. The officer shot Brooks in the back, killing him.

Atlanta Police Chief Erika Shields has resigned over the incident. Shields called for the termination of the police officer who shot Brooks and for the officer to be placed on administrative duty.