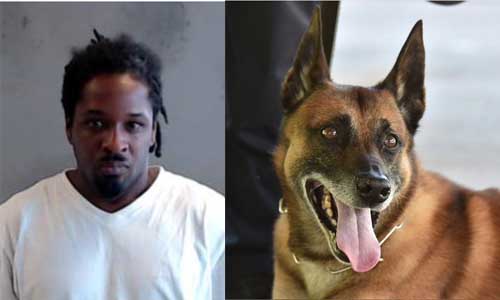 The DeKalb County Sheriff’s Office has arrested the rape suspect whose pursuit earlier this week resulted in the accidental death of K9 Deputy Bloo.

Marquizs Harvey, 35, of Atlanta, was taken into custody without incident today (Aug. 6) after authorities located him at an East Point, Georgia residence.

K9 Deputy Bloo died on Aug. 4 from gunshot wounds sustained in a foot pursuit of the suspect during an attempt to serve the arrest warrant. The DeKalb County Sheriff’s Fugitive Unit were attempting to serve an arrest warrant on the rape suspect when the K9 Deputy Sheriff escaped his partner’s control and was accidentally shot after becoming aggressive with a plain clothes sheriff’s investigator.

“The K9 Deputy lost sight of the suspect and came upon a plain clothes sheriff’s office investigator involved in the pursuit,” said Chief Deputy Randy Akies.  “When the K9 Deputy advanced aggressively, the investigator fired in self-defense and, unfortunately, the K9 died on the scene as a result of the injuries.”

Memorial ceremonies are being planned for later this month.

Harvey was transported to the DeKalb County Jail.