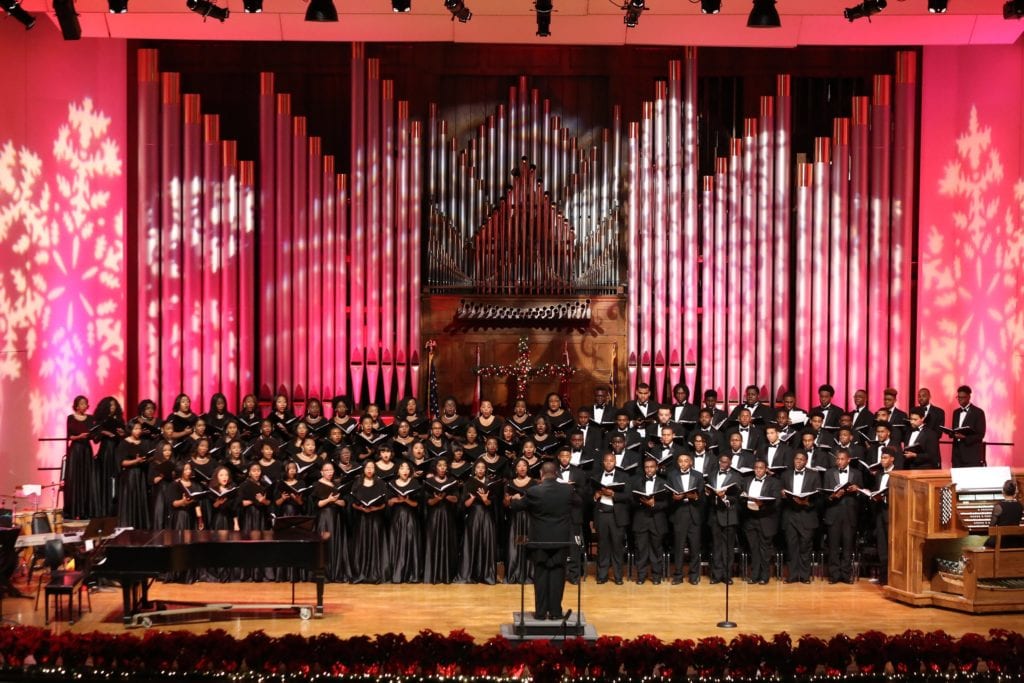 This weekend, the 91st Annual Morehouse-Spelman Christmas Carol Concert, a tradition that has marked the opening of the Christmas season for generations of Atlanta residents, will be held at Morehouse College’s Martin Luther King Jr. International Chapel and Spelman College’s Sisters Chapel.

No advanced tickets are required. Admission is free of charge.

Performing together and as individual Glee Clubs, the annual concert will feature traditional carols along with contemporary interpretations of holiday music

and a variety of other songs. The singers will also perform audience favorites, including Morehouse’s popular rendition of “Betelehemu” and Spelman’s “We Are Christmas.”

“The annual Christmas Carol Concert is a gift that Spelman and Morehouse are honored to share with families each holiday season,” said Spelman President Mary Schmidt Campbell. “From their hearts, our students and faculty offer guests a taste of Christmas and launch the holiday season with unforgettable music from across the world.”

The annual Christmas concert dates back nearly a century. It began in December 1927 – two years before Morehouse graduate Martin Luther King Jr. was born, one year before the venerable Atlanta African-American newspaper, the Atlanta Daily World, was founded, as well as the Harlem Globetrotters. The idea for the concert came from the presidents of the two institutions, John Hope of Morehouse, and Florence Matilda Read from Spelman.

The first was held in Spelman’s Sisters Chapel, then the largest venue between the two colleges. The tradition grew as crowds grew, with the concert becoming a three-night affair. When Morehouse’s Martin Luther King Jr. International Chapel was built in 1978, the concert partially moved to into the larger venue. Eventually, the format became the two nights at Morehouse and one at Spelman to usher in the Christmas season.

“The annual Christmas Coral Concert is a signature event that attracts visitors from across the state and nation to the AUC to hear our talented and hard-working students sing,” said Harold Martin Jr. ’02, Interim President of Morehouse College. “This shared gift from Morehouse and Spelman is our way of saying ‘happy holidays’ to the community we love being a part of. We want everyone in Atlanta to know that we appreciate them and this great city.”

The directors of the Glee Clubs are Kevin Johnson at Spelman and former Glee Club member David Morrow ’80 at Morehouse. Johnson and Morrow said that audiences will enjoy this year’s repertoire of moving pieces that will be sung masterfully by the acclaimed choirs.

“We are happy to say it is a gift to the community,” Morrow said.  “A lot of people start their Christmas holidays with this concert. We are excited.”