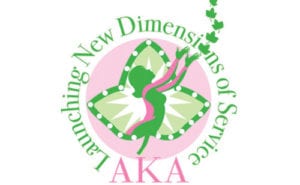 Atlanta will become a sea of pink and green as Alpha Kappa Alpha Sorority (AKA) sisters from around the world converge on the city for its international convention July 9-16. More than 22,000 members of the organization, known for their signature pink and green attire, are expected during the organization’s 67th Boule, which will honor the late Dr. Mary Shy Scott, a prominent educator and motivational speaker who served as the sorority’s 23rd international president.

Members from as far away as Germany, Japan, South Korea, Liberia, South Africa and Dubai are expected to attend the convention, which will be held at the Georgia World Congress Center, as well as several other hotels in the metropolitan area, organizers say.

Atlanta was selected as the host site for the conference because of its deep Civil Rights roots and historical significance to the sorority, members said. The city has served as home to icons such as Dr. Martin Luther King, Jr.; Alpha Kappa Alpha founder Marie Woolfolk Taylor, who is buried in Atlanta; and the late Dr. Scott.

Led by AKA’s International President Dorothy Buckhanan Wilson, attendees will join hands to uplift the needy through the organization’s planned “23 Moments of Service.”

Members will package 100,000 meals in collaboration with Stop Hunger Now, participate in five playground restoration projects at local parks and schools, hold a school supply and backpack donation drive and receive hands-on CPR training, among other service activities. Reaching beyond Atlanta, they also will be participating in the “Little Dresses for Africa” project. Sorority sisters from all around the world are creating 29,000 pillowcase dresses for girls in Africa and bringing them to the biennial conference. The dresses will be sent to villages in Tanzania, South Africa, and Liberia.

AKA President Wilson said she is proud of the global community service work the organization has rendered and continues to do.

“For more than 108 years, service has been at the forefront of Alpha Kappa Alpha’s mission,” said Wilson. “During Dr. Scott’s administration, she identified creative strategies to address the local and global challenges faced by those most in need. Dr. Scott embodied this mission of service and in her memory we are putting some of her same strategies to work in Atlanta.”

Alpha Kappa Alpha Sorority will be joined by several partners that are working under its national program’s theme, “Launching New Dimensions of Service: the American Heart Association; Alzheimer’s Association; the National Alliance on Mental Illness (NAMI); United Nations Association of the United States of America (UNA-USA); Africare; and KaBoom! The partners and Atlanta area community members will perform an unprecedented number of service hours throughout the conference.

Alpha Kappa Alpha Sorority, Incorporated (AKA) is an international service organization that was founded on the campus of Howard University in Washington, D.C. in 1908. It is the oldest Greek letter organization established by African-American college-educated women. Alpha Kappa Alpha is comprised of more than 283,000 members in 993 graduate and undergraduate chapters in the United States, Liberia, the Bahamas, the U.S. Virgin Islands, Germany, South Korea, Bermuda, Japan, Canada, South Africa and in the Middle East. Led by International President Dorothy Buckhanan Wilson, L.H.D., Alpha Kappa Alpha is often hailed as “America’s premier Greek-letter organization for African-American women.” For more information on Alpha Kappa Alpha Sorority and its programs, visit AKA1908.com.